My step-uncle is not only an amazing author of 3 books, but a word-smith with an apparent knack of telling it how it is. He was recently “bored” and decided to re-write the Bible and bring it into the modern era:

In the year of Our lord 2011, Noah was living above a former boatyard
in Caterham Town, along with his sons Ham, Shem and the other one
nobody can ever remember, when the Lord came unto him. “Noah, good
servant of mine.
Once again the world has become wicked and over populated. Build
another Ark and save two of every creature. Then gather around a few
good humans and prepare for the deluge to be visited upon the Earth in
six months. Here are the blueprints for the Ark”
Six months later God returned to Caterham, but there was no sign of
the Ark, just Noah sitting on his arse looking rather dejected in his
boatyard. “NOAH! Where’s the Ark? I’m about to start the rains.”
“Forgive me Lord but I needed a building permit, and these premises
were no longer licensed for boat construction. That took weeks to sort
out. Then the Inspector of Boats insisted I installed a sprinkler
system.(EU Directive 97/EC/1492BC); then the neighbours complained I’d
violated local by-laws by exceeding permitted height limitations, that
took another three weeks to sort out; then I had to source Gopher Wood
from the sustainable Forest of Dean. Don’t even mention the nightmare
I had about getting the animals-the trouble I’ve had with the RSPCA.
Then the Environmental Agency turned up. They want an Environmental
impact study on your proposed flood.”….”As for the crew.” Noah
continued. “I had the Racial Equality lot here last week demanding we
follow correct interviewing procedures, with the composition of the
crew reflecting diversity among all religious, cultural and ethnic
groups. Its doing my ‘ead in Lord!”
Suddenly the clouds rolled away, the sun came out and a glorious
rainbow stretched across the sky. Noah looked up in wonder scratching
his arse. “Lord does this mean you’re not going to destroy the world?”
“No I’m not.” said God. “The Government has already f**ked it for me.”

Certainly made me laugh!

Let me know what you think and please do check out his books. They are based on fact relating to Jews during World War II and the stories and details are brilliant. Amazing writing and truly moving. You can get the books here.

The other day, I blogged some pictures of the Holocaust and commented how we must never forget this part of history.

I’d like to add to this. On 15th May 1945, Japan official surrendered and ended the second world war. We celebrate this day as VJ day. This moment in time may not be as famous to us in Britain as VE day, but it is just as significant in our history and the sacrifice on the par with the European soldiers.

A few figures for you (courtesy of Imperial War Museum, London):

During the war in the Pacific, the Japanese were famous for total ruthlessness in battle and towards their captives. This can be put down to the Japanese culture of surrender being dishonourable (just what I’ve heard). However, the fact remains that PoW’s held in camps in Thailand and Burma (and others) were treated as sub-humans, brutally beaten and starved. Due to the tropical climate, disease was rife in the camps and little or nothing was done. 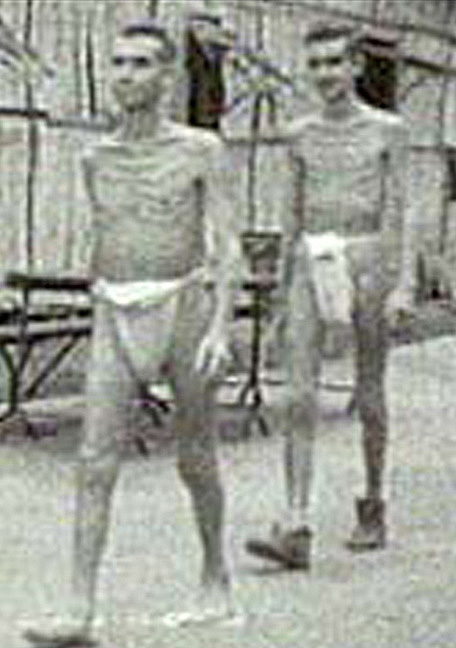 PoW being executed at a prison camp

My mother told me of a story: One of her uncles (Billy) fought during the war based in Burma. According to him, his troop used to reccy through the jungle in single file due to the undergrowth and, as a precaution, they would tie a rope around themselves and use it as a guide to know no one got lost. One day, Billy’s friend was bringing up the rear of the column. when they got back to camp, he was no longer there. They went back into the jungle to find him. They found him dead, nailed to a tree. The Japanese had cut the rope and took him from the back of the column without anyone realising.

Here is a piece by the BBC on the Forgotten Army. The effects of these prison camps became real to me when I tried speaking to an ex-PoW who my mum looked after for my school homework. He refused to speak of it. All he would tell me is that not one night has gone by in 50 years (when I spoke to him) where he has had a full nights sleep. Every night he has woken up suffering nightmares and will never forget. He passed away last year, still never having a peaceful nights sleep.

During the japanese occupation, they used forced labour to construct a railway from Bangkok, Thailand to Rangoon, Burma. This railway ran for 258 miles through tropical jungles. About 180,000 Asian labourers and 60,000 Allied POWs worked on the railway. Of these, around 90,000 Asian labourers and 16,000 Allied POWs died as a direct result of the project. The dead POWs included 6,318 British personnel, 2,815 Australians, 2,490 Dutch, about 356 Americans and a smaller number of Canadians. this railway became know as The Death Railway

My point of this is simple and ties in with my Holocaust post: we must study this, learn and evolve. We can never go back to treating people the way these PoW’s were treated. War is not acceptable. Diplomacy is the only way this world can become what we all want: a peaceful place were all can live together.

*I’d just like to point out that I am in no way against Japanese or Germans. The sins of the father can NEVER be put on the sons and daughters.

I’m reading an amazing book called Voices of Yesterday by Michael Yarwood. It is set in the Warsaw Ghetto during ’42-43 and the oppression and systematic extermination of the Jews by the Nazi’s. And the vivid words of the writer got me to thinking and imagining what these people went through, the suffering and brutality forced upon them by the Nazi’s (and not just Jews, but Romani, homosexuals, ethnic minorities and many more). The figures stand at around 6 MILLION Jews wiped out by the Nazi regime (2/3 of the European population of Jews). If you include the other  groups killed by the Nazi’s this figures rises to between 11-17 MILLION PEOPLE! All non-soldiers.

So I’ve done some surfing and found some pictures I’d like to share with you. Next time you hear someone verbally abuse someone or say racist or homophobic comments, show them these photos and ask them to look into the people’s eyes and put themselves in their shoes: 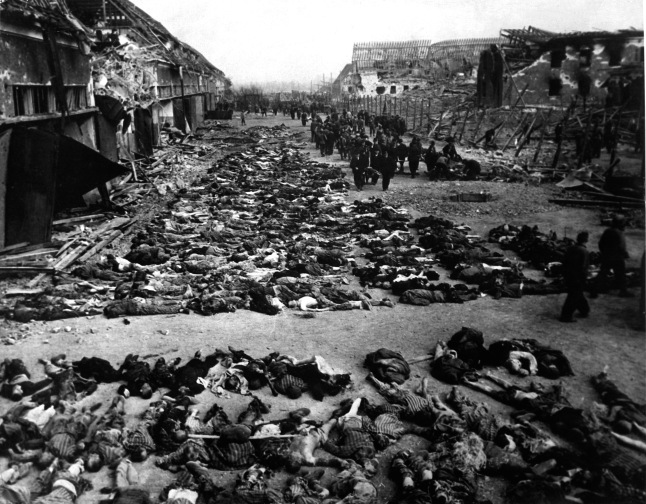 A member of Einsatzgruppe D is about to shoot a man sitting by a mass grave in Vinnitsa, Ukraine, in 1942. Present in the background are members of the German Army, the German Labor Service, and the Hitler Youth.[94] The back of the photograph is inscribed “The last Jew in Vinnitsa”. 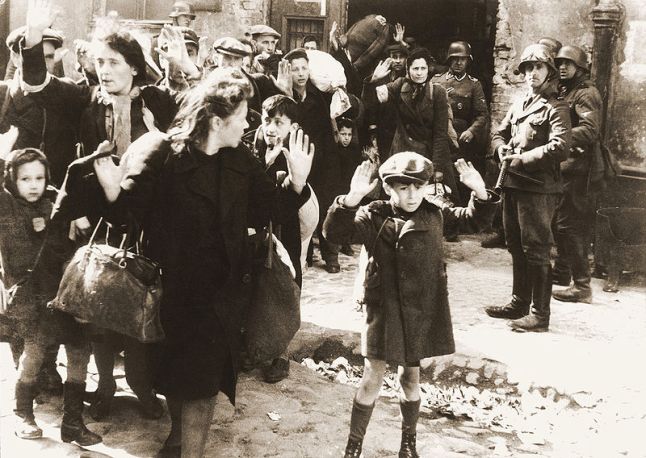 Jews captured and forcibly pulled out from dugouts by the Germans during the Warsaw Ghetto uprising. The photo is from Jurgen Stroop’s report to Heinrich Himmler

A child dying on the streets of the Warsaw Ghetto 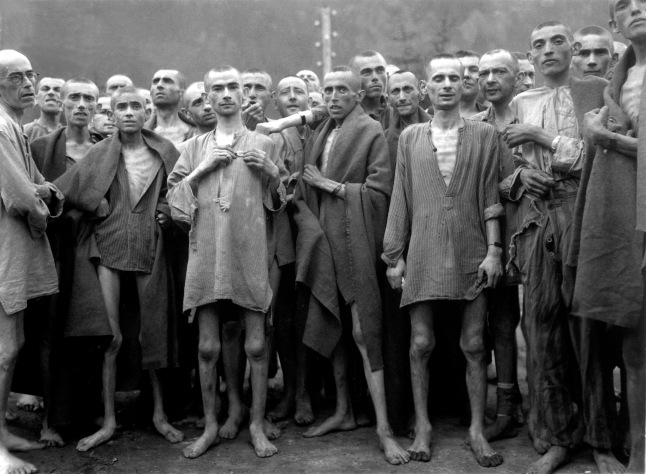 Starving prisoners in Mauthausen camp liberated on May 5, 1945 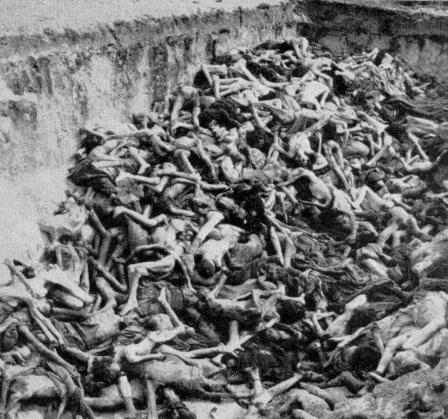 A grave inside Bergen-Belsen concentration camp

I’m sure some people who see this will still stick by their disturbing views of racial and religious superiority, but these people have no soul. No human being can look at these images, think clearly about what is being done and still condone secular violence or hatred of any kind. Please, I beg you all, educate each other and the youth of today.

70 years ago, a flotilla of nearly a thousand ships crossed the English channel destined for the beaches of Dunkirk to rescue more than 300,000 Allied troops from the advancing Nazi forces. Among these vessels were not only navy ships, but civilian ships also: fishing boats, lifeboats, pleasure boats and paddle boats. These sailors were not navy men, they were normal men answering the call, not only of their country, but of humanity. Soldiers fighting for freedom from oppression were pinned down and navy ships couldn’t get close enough for the rescue due to the shallow water. These “little boats” could and went in to rescue the Allied troops.

Thats a brief explanation of the events at Dunkirk (sure I’ll be corrected on details, but that’s the essence). I’m so very proud of all the men and women in the Allied Forces who fought and died during WWII, but the everyday civilian truly makes me proud.

I’ve been fortunate in my up bringing. My mum is a warden for a sheltered home (old peoples home) and I’ve had the pleasure of living there with them and hearing stories of life during the war. Some truly harrowing, but others truly inspiring. How people went without things in their everyday lives, Londoners enduring the Blitz, resistance fighters on the continent consistently defying the Nazi regime and doing all they can to undermine their war efforts.

I was lucky enough to know a man, Robert, who had his own boat during the Dunkirk evacuation. I saw a picture of this boat with him standing on it. It was a small fishing boat which he could have walked the length of in maybe 8 strides. He took this boat from Ramsgate to Dunkirk to help rescue as many soldiers as he could. He told me what he saw and experienced. I couldn’t do it justice by re-telling his story, but as a young boy of 13, I was awe-struck by the bravery of him and others and I’ll admit, shed a tear or two. He showed me the flags they used to communicate with one another (not sure of the correct term for them) and it felt strange holding this material which had taken part in a moment of history.

The term “Dunkirk Spirit” was coined for such men as Robert. For me, it typified the British grit and determination in the face of adversity. It showed true honour and respect, attributes that are sorely missing in today’s society. I wonder if our generation would be so ready to jump to action as these heroes were? Would an ASBO earning chav put his life on the line to help others with nothing in return?